Singles’ Day is Growing in China and Southeast Asia Is Next

You’ve probably heard of Singles’ Day, also known as Double 11, a shopping day where Chinese buy gifts for themselves and celebrate being single – an anti-Valentine’s Day, in other words. What started as a relatively obscure event has now become the single largest shopping day in the world, with no signs of slowing down.

The reasons why Singles’ Day is breaking records every year

Just how big is Singles’ Day? Alibaba reported that their Singles’ Day sales this year were more than $38 billion, a 26% increase over last year’s then-record of $31 billion. To put this amount in perspective, that’s more than Black Friday, Cyber Monday and Amazon Prime Day combined. In fact, this shopping event has seen double-digit growth ever since its inception and if this year’s figures are any indication, we are very likely looking at continued growth in 2020.

The question on everyone’s mind is: why is this event so big in China? The reason is a collection of factors, actually: increased spending power, improved logistics infrastructure, and wider demographics reach.

First of all, Chinese people are earning more and have more money to spend – the Chinese middle class is now almost 40% of the entire country’s population and is looking to reach 550 million by 2022 according to McKinsey forecasts. Secondly, Alibaba has invested heavily in its infrastructure by investing an extra $3.3 billion in Cainiao, its logistics arm. Third, Singles’ Day in China is no longer bound to young demographics. Older generations tend to participate in this shopping spree as much as the youth, mainly due to the fact that 99% of its 800+ million mobile internet users rely on their smartphones to access the internet. In fact, in 2017 Alibaba reported that over 90% of its sales were driven by mobile.

Southeast Asia is the new land of e-commerce opportunities

Looking outside China, Singles’ Day has seen tremendous growth in Southeast Asia. Lazada,  a major SEA e-commerce player owned by Alibaba, received over 3 million orders within the first hour of the event, according to CNBC. Rival company Shopee said its orders tripled in volume compared to 2018. Their apps are consistently top 2 in the shopping categories across the six major Southeast Asian countries (Indonesia, Philippines, Malaysia, Singapore, Vietnam, Thailand), particularly around Singles’ Day. With the 2019 numbers still coming in, it’s clear that Singles’ Day in Southeast Asia is a commercial success and is only getting bigger.

Another interesting way the SEA e-commerce players like Lazada and Shopee were able to gain significant market share was by implementing interactive features into their apps. For example, Lazada’s Slash It feature allows users to invite their friends to help slash the price of an item. This type of so-called “social commerce” was pioneered by Chinese e-commerce companies like Taobao and T-Mall, both owned by Alibaba.

“Another interactive feature coming from China’s top e-commerce players is live-streaming, which has become increasingly popular in Southeast Asia. We see huge positive trends in terms of customer engagement, especially during sales seasons,” said Irene Yang, Mobvista’s Regional General Manager for Asia & Europe. “To succeed in the competitive digital retail scene, e-commerce companies need to catch up on such innovation trends: interactive tactics like short-form videos or live-streaming are widely implemented by Chinese e-commerce businesses and have been proven to be extremely effective.”

E-commerce is one of the two main growth engines of Southeast Asia’s internet economy, which is predicted to grow to over $300 billion by 2025. So why is SEA such a fertile land for e-commerce growth?

Southeast Asia’s e-commerce big players Lazada and Shopee have adopted the so-called “shoppertainment” trend which is basically live-streaming e-commerce shopping, a feature that’s very popular in China. Rather than looking at static images of products, users can interact with a host, play interactive games and buy products, all from the comfort of their homes. Big brands like L’Oréal, Chope, and Innisfree showcased their products on the Shopee live stream platform and according to Shopee’s Chief Commercial Officer Zhou Junjie, participants saw sales increase by up to 75%.

Another important way Shoppee leveraged its position in the market was its usage of splash ads on the TikTok app, a Mobvista partner. Thanks to this initiative, Shopee was able to leverage TikTok’s massive user base with its own social commerce features and significant discounts to achieve impressive sales numbers. 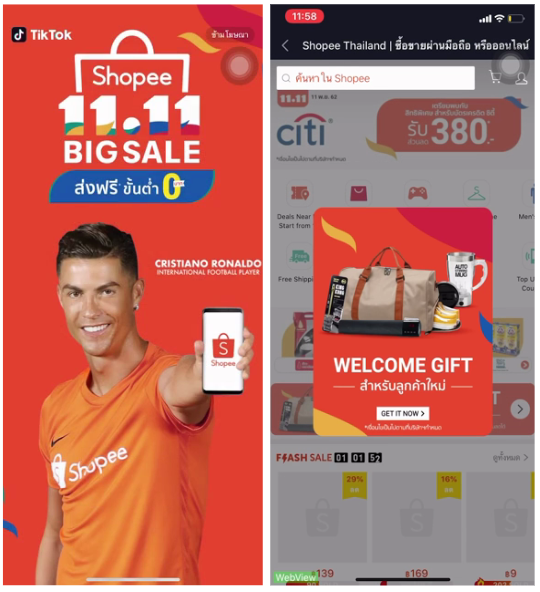 Types of ads used by Shopee on the TikTok app

Singles’ Day is the biggest shopping event in the world and its trajectory is looking very healthy in China. At the same time, its incredible growth in the SEA market is something that brands need to start leveraging, as the e-commerce ecosystem in the region has significant room for growth.

Big SEA players like Lazada and Shopee are showing that the “social commerce” model works outside China, which is a positive sign for advertisers looking to use the power of large communities to achieve growth.

Mobvista is dedicated to providing strategic solutions that generate sustainable growth for e-commerce businesses. We customize campaigns at each stage of your customers’ lifecycle, from scalable UA to strategic re-targeting and win-back campaigns. Our in-house creative lab can generate high-quality, engaging creatives that are tailored specifically to your brand and the platform you are targeting. Some of the e-commerce companies we have been working with include Lazada, Shopee, Tokopedia, and Myntra, so if you’re looking to expand your business, contact us today!