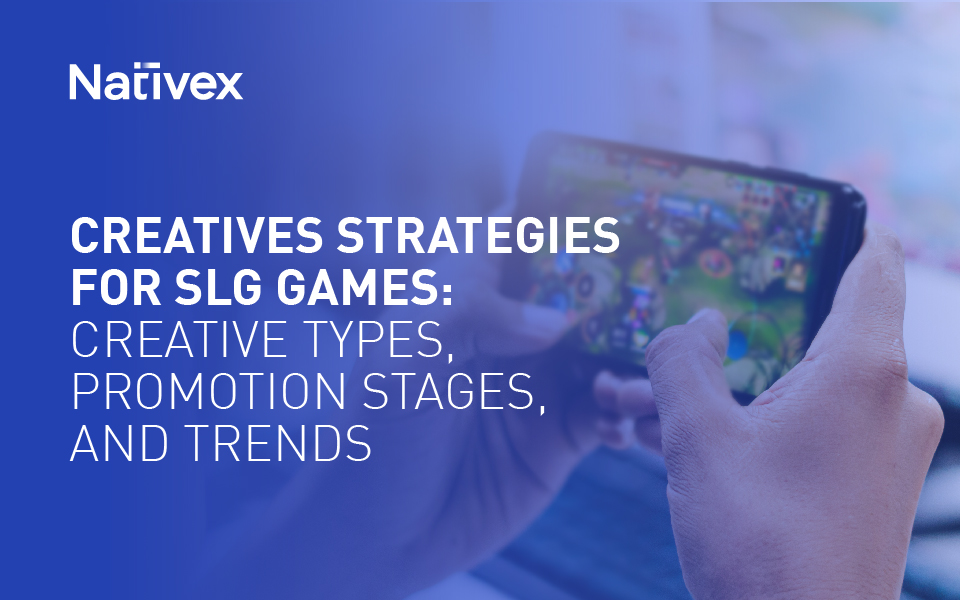 Based on their long life cycle, SLGs must continuously maintain user acquisition and player retention. This results in the quality and performance of creative content becoming the key to growth. Advertisers must capture user attention and increase the number of quality players. To players who already experience countless game ads, game developers need more attractive creatives that resonate with players.

With the practical experience of first-line marketing, our goal is to provide a creative marketing guide around the SLG category in the US market, bringing you in-depth analysis and studies on various creative types, promotion stages, and trends in SLG games.

Use Different Formats to Attract Players

SLG games advertising in the form of live-action, 2D editing, UE4 videos, and playable interactive ads. While the different formats have corresponding focuses, it varies in what they can achieve.

Due to the mature film and entertainment industry, North American gamers are more interested in live-action creatives.

Live-action videos can be highly integrated and used in a variety of ways. For example, 2D/3D videos of game footage can be embedded into episodes to achieve better content delivery. Live-action video can be used to present rich content in the language of film and television, while at the same time, it can be used to combine real culture with game content to enhance the appeal of the advertisement.

Usually, SLGs contain a lot of social elements. Videos of real-life interactions can be well integrated with different scenarios, reflecting the player’s warfare/army/partnership. Utilizing both real-life humans and virtual game characters can better attract users and drive their emotions.

The most original game form, 2D, can effectively show the content and characteristics of the game itself. The simplistic production and low cost of 2D clips make it a go-to for many SLG games. However, its simplicity has saturated the market and tends to have a short life cycle.

UE4 videos are more complex than live-action and 2D clips, thanks to virtual engine technology.

For example, the battles often seen in the world of SLG games can be shown in all dimensions through UE4 video. It has the ability to show the detailed features of the characters and equipment to a greater extent. For creative directors, UE4 video also gives them more room to create video content with more dramatic in-game conflict.

Playable ads are a form of HTML5 that transforms advertisements into mini-games, allowing players to experience them without downloading. This helps games gain more exposure and reach more potential users. Most SLG developers are currently hesitant about this format because of the perceived high cost and technical requirements.

With the growing popularity of mid-core and casual games, SLG games are adopting their methods for traffic buying. For example, SLGs are taking the highlights of their game and using them as playable ads to gain more downloads. These interactive creatives can give users a better sense of what to expect from the game and help strengthen brand awareness, especially for IP-based mid-core and hardcore gaming titles.

The objectives of each promotion stage should be different, and the focus of creative content and strategies varies accordingly. Generally speaking, SLG games are mainly divided into the pre-registration period, promotional period, and stable promotion period.

As the name suggests, the goal of this promotion phase is to obtain pre-registrations. The direction of the advertisements placed are mainly for product promotion, IP awareness, and core gameplay display.

It is recommended to show game elements, game selling points, and classic character images; by highlighting the selling points of a game and showing actual gameplay at the beginning, it can attract potential players.

• Creative Tips: Users at this stage are still unaware of the game’s distinct features, so showing content that can communicate the game’s features is key. We recommend promoting the game between periods of low app publication and the peak seasons.

During the pre-registration period, the main goal is to popularize the game before it is released.

Therefore, during the promotional period, the objective is to build user trust and increase user retention. This can be done using a spokesperson, KOL, product promotion, and IP.

• Creative Tips: This phase requires many promotional videos to be generated; thus, production quality, quantity, and budget usually reach their peak. The timing of this promotion phase is recommended to focus on major in-game events and product updates.

Increasing installs and driving AEO (in-app event optimization) is the goal during the soft launch period. During this stage, feedback and data are essential for performance analysis, especially from potential or new users. Therefore, the main content for this phase can be live-action advertisements and video clips of the game.

• Creative Tips: After the game has been popularized, the culture and trends of the game will gradually become more familiar to the audience. This allows you to use more of the game’s culture for video ads.

The emergence of new and innovative themes of SLG mobile games has naturally increased the development of more creative content.

The combination of creative advertising and new game themes has helped rejuvenate the SLG audience and attract a large number of new users, which plays a crucial role in boosting the success of advertising. Through this, game developers have the ability to quickly gain insight into the creative direction of SLG games and improve the quality and efficiency of the creation of advertisements.

SLGs’ uniqueness like expansive maps and group battles, can be fully demonstrated by well-made, innovative content. In different markets, figuring out how to fully deliver/present the game’s culture, settings, and plot to players in a popular way is the key to success. TopWorks is helping game developers solve these obstacles with professional creative teams around the world. By understanding the cultural nuances of the local market, we can produce more attractive creatives.

Nativex recently created a creative marketing playbook around the SLG category in the US market, bringing you analyses and insights, along with in-depth case studies, helping SLG developers expand into global markets and capture the growing demand.

The Importance of Creatives for Boosting Your Game Growth
Video creatives have recently become the most popular ads for mobile games. According to SocialPeta, along with the coverage of the 5G Networks and the development of global mobile network technologies, the number of video creatives increased by 73% in 2021 compared to 2020 and will keep rising this year. In addition, nearly half of ...
2022-10-26
400 Million Views: How “The Ants” and its Kwai Hashtag Challenge Triumph in Brazil
"The Ants" Kwai Hashtag Challenge has scored over 400 million views in Brazil
2022-10-09
Share