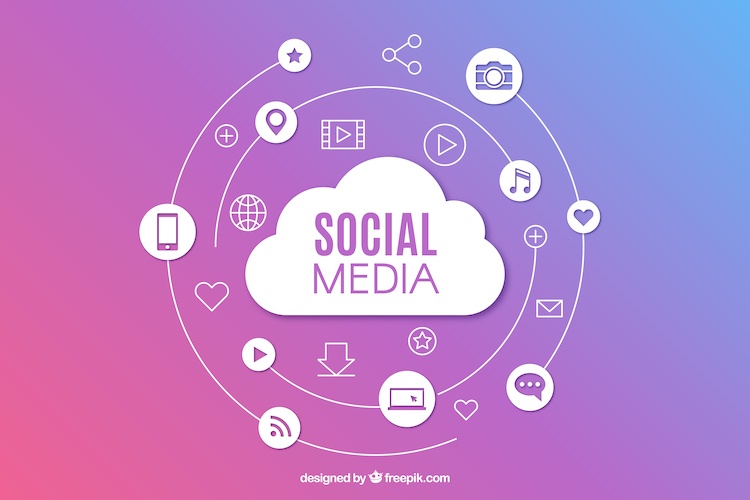 WeChat surpassed 1 billion daily active users at the end of 2018, and Tencent tries to keep its users engaged with strong creative campaigns.

September saw the launch of ‘Moonments’, a mixed-reality campaign during the mid-autumn festival to celebrate the full moon that appears at the end of the autumn harvest.

The signs seem to suggest that younger Chinese users are turning away from WeChat’s social features like Moments, though.

Statistics from research firm JiGuang suggest that only 15% of users born after the year 2000 post every day on WeChat, compared against 57% of users born in the 1960s. 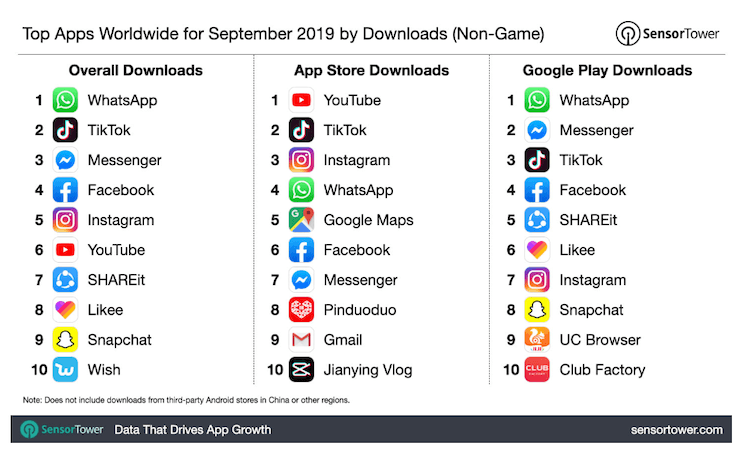 WeChat is an incredibly versatile piece of software. Developed by Tencent, the Chinese app is a social media powerhouse that allows messaging in various different ways – from broadcast to conferencing – mobile payments, gaming, video sharing and more.

Younger users looking for new social avenues seem to be part of a wider trend of how social networks are used – not just in China, but further beyond Asia, too, as their online habits evolve.

Research from AudienceProject has shown that younger people in the West are beginning to shun Facebook, too. What was once unthinkable is starting to become reality; Facebook’s status as a cool social network appears to be waning amongst the young, as their heads are turned by other ways to socialise.

AudienceProject collected data from 13,000 people across the US, UK, Germany and Northern Europe for their AudienceProject Insights 2019 study and looked to ascertain the ‘indispensability’ of certain mobile apps. Their results make bad reading for Facebook. 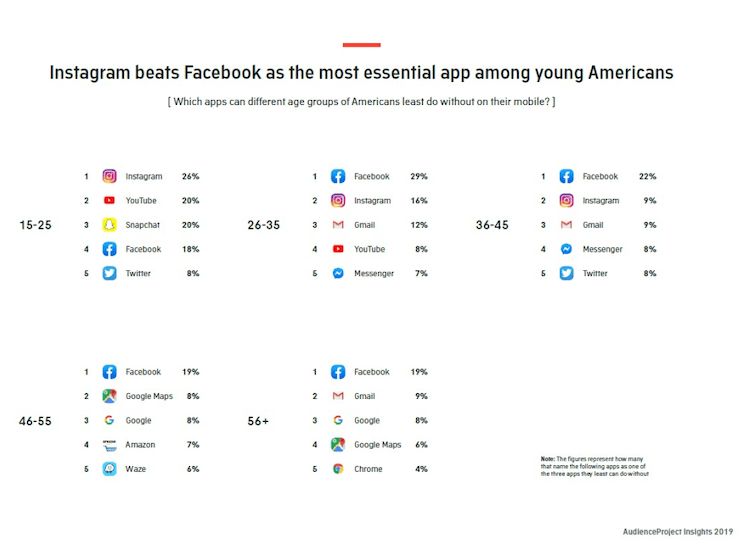 So what apps are these younger social media users using and where are they spending their time online? The data suggests that those younger users are happier using video apps such as Douyin (better known as TikTok) in the west.

60% of the app’s global monthly users are aged between 16-24 according to Mediakik in 2019, and with 500 million monthly active users globally, its success is being driven firmly by Generation Z.

There are numerous theories as to why younger groups are turning away from traditional social media apps.

One of Tencent’s other apps, QQ, announced at the end of 2018 that users below 21 years of age increased by 13%. It also reported a significant increase in its short video traffic of over 50% – growth specifically attributed to its push toward younger users by adding special effects and stickers that younger users could use in their video chats.

Those fun ways of interacting with peers support the perception that Generation Z is flocking towards social networks that their parents don’t use to avoid snooping.

There’s almost a generational gap in the tech world between young and old, which is perfectly summed up by Guangzhou university student Xue Shuoyi, who told Abacus: “I have never shared anything on WeChat.

“For me, it is becoming a platform for my parents and professors, the old generation to sort of keep an eye on the young people. That’s the main reason why most of my friends and I do not post any important thing there.”

Instead, they’re attracted by more niche communication services and apps designed to take younger users away from social platforms across the world like Facebook and WeChat.

Instead of sharing information publicly with anybody and everybody on Facebook, they’re preferring to communicate privately in entertaining ways with their friends.

Though the platform and sharing content publicly on networks like Facebook may not be what younger generations are after from their social network, it doesn’t mean they’re on the verge of collapse any time soon.

While 11 million millennials are said to have left Facebook over the last two years, they’re still using and jumping to Facebook-owned platforms including WhatsApp and Instagram. Sensor Tower’s September data shows that Snapchat is also gaining traction thanks to engagement with the app from Generation Z.

Whatever the reason, it’s something that brands and digital advertisers will have to consider when looking to reach out to younger demographics in both eastern and western territories.

Younger social media users across the globe are turning from social media platforms where they can share every aspect of their lives to more secure messaging apps like WhatsApp and video-messaging platforms such as Douyin.

Younger demographics are increasingly aware of the platforms used by their parents and older generations, and are adopting new, exciting ways to socialise with their peers.

Facebook and WeChat ‘Moments’ demographics are older because users have grown with them over the years. Younger users are looking further afield and adopting their own ways of communicating, and will likely grow with them, too.

If the 16-24 demographic or ‘Generation Z’ is who you’re looking to attract, then you have to heavily research that audience and communicate with them to see what apps they’re using to communicate with each other, share stories and build communities.

Not just for ad placement, but for your wider creative approach, too. We’ve previously created two posts to underline some of the most popular mobile marketing platforms that can be used in China, for instance (Part 1 and Part 2), but it can be tough for brands based in the West to use these platforms as naturally as they do Facebook and Google.

Similarly, with restrictions on Google and Facebook in China, what’s the best way for a brand based there to target younger demographics who like to avoid general social platforms? WhatsApp will be showing ads on the platform from 2020; how will you use them, and could the appearance of ads actually drive away from the market you’d most like to connect with?

What marketers everywhere are getting wrong about the Chinese market
Marketers around the globe are missing out on valuable opportunities to tap into the engagement, influence and buying power of Chinese consumers, according to Irene Yang, managing director at mobile advertising platform Nativex. Here, Yang argues that brands with a more mature understanding of the Chinese mobile market, the country’s regulatory landscape and trends such as livestream e-commerce stand to capture a larger slice of the Chinese market.
2021-08-27
What you need to know to ensure your ad creatives are successful in China
Nativex's Irene Yang guides mobile developers who wish to enter the lucrative Chinese market
2021-08-25
Understanding TikTok: platform nuances and optimising campaign performance
To maintain a consistent and significant level of user engagement and hence conversion, advertising campaigns on TikTok must maintain an always-on stream of creatives, explains Suki Lin, the senior director for Asia Pacific at Nativex.
2021-08-11
TikTok tips: How to optimise creative, ad formats and volume
A senior director at Nativex, an app marketing platform which has a TikTok ad solution, provides advice on how to master the creative process on the popular video app.
2021-08-10
Share