What Western Publishers can Learn From China’s Coronavirus Response 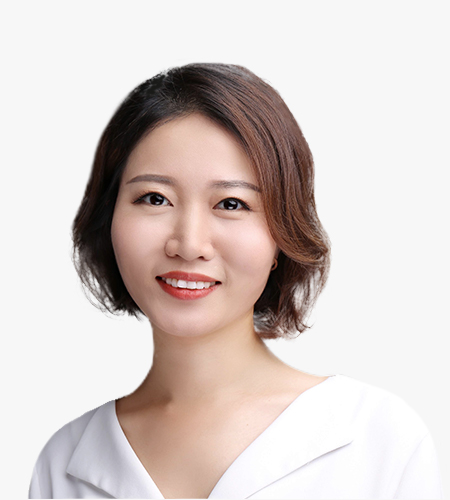 Leticia leads Nativex’s European business division, helping Western companies achieve success in the APAC markets. She has worked with advertisers from Europe as well as the East (South Korea, Taiwan, South East Asia), across different app categories from gaming, to utilities and e-commerce.

Leticia Ye is the general manager of EMEA at Nativex.

By the end of March 2020, more than 100 countries had actioned either a full or partial lockdown because of Coronavirus.

With most major economies from east to west now slowly coming out of hibernation, data is being published to show how the general population across each continent coped with quarantine, and how they spent their time indoors.

As a result of all this enforced time indoors, gaming of all kinds has surged, with games publishing one of the few businesses right now that is alive and well. Steam, for instance, broke its all-time high concurrent users record with just shy of 25 million users logging on in early April.

In the U.S., Forbes reports that gaming company stocks are faring well, while stocks from other sectors are in freefall. The U.S. has also seen a 70% surge in video game usage at peak times.

Recent data from GameAnalytics’ Benchmarks+ platform also shows the global impact on the industry over Q1 2020. Mobile gaming saw a huge surge during lockdown, with playtime 62% higher in March than in January. 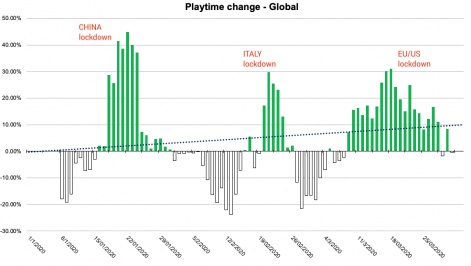 The top 2% of games in the adventure genre saw an increase in engagement of 25% globally. That equates to an average of four hours per user, according to GameAnalytics.

Hyper-casual games also grew globally during lockdown, though at a slower rate. Since January, hyper-casual titles grew from 8% to approximately 10%, with time spent per user increasing from 71 minutes to 81.

The biggest change in playtime could be seen in January, in China. China was the first nation to go into regional lockdown with the country easing up mid-March. The data emerging suggests mobile gaming was key to keeping China’s population entertained during quarantine.

The apps and games that saw China through lockdown

A huge amount of China’s residents’ time was spent on TikTok, according to App Annie, with the week of March 1 TikTok’s biggest ever in China. 3 billion hours were spent on aggregate in the app; a 130% rise from 2019’s weekly average.

iOS app downloads also saw their biggest week ever at the start of February, with apps in the Business and Education category seeing the largest surge as the population shifted to working from home. 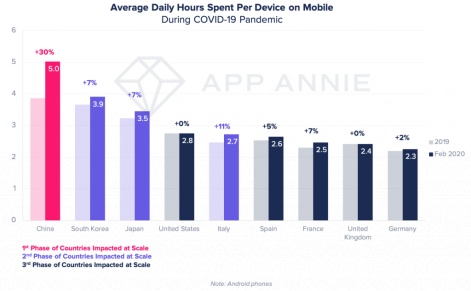 Game-wise, mobile users flocked to already popular games such as Tencent’s Arena of Valor (also known as Honor of Kings). So much so that Tencent’s servers were unable to cope with demand at one point as daily users surged to 100 million.

Tencent’s Game for Peace – China’s version of PUBG Mobile – also saw surges in playtime, with the company also having to expand server capacity to cope with an increase in player numbers.

How China’s publishers pivoted to a new normal

Mobile games weren’t the only things helping China’s population through lockdown. China’s Esports scene – already hugely popular in the country and supported by the government – pivoted quickly to become a leading source of entertainment during lockdown.

Tencent, owners of the King Pro League (KPL), which is the country’s leading professional competition for Arena of Valor, moved fully online and introduced new challenges for players to keep viewers interested.

Other major publishers including NetEase and Alibaba were also able to pivot quickly to offer new services and support for those in lockdown. That flexibility was key to helping Tencent and NetEase emerge strongly from China’s lockdown. 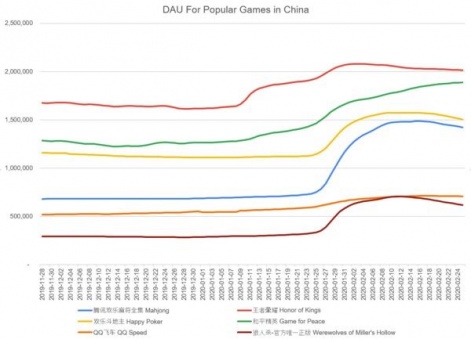 Tencent especially; the increased playtime in its titles helped Tencent increase its market value by over RM 100 billion up to March 5 – its fastest revenue growth since 2018.

NetEase’s game Werewolves of Miller’s Hollow saw its daily active users double since December in China, with growth of 131%, according to data from Apptopia. Those figures combined with other increases in engagement of the NetEase library saw it and Tencent outperform the Hang Seng Index by more than 10% this year.

Advertising to an audience in quarantine

While users were able to discover new games and apps to entertain themselves through the country’s various app stores, there was still the tricky question posed of how to communicate and connect with customers in an advertising capacity during lockdown.

Alibaba was just one company to lead the way with native advertising through its Taobao shopping app. Aimed at Generation Z, Taobao features a social game called Taobao life, where users can customise 3D avatars and connect with friends.

With lockdown coinciding with Valentine’s Day, Alibaba’s Tmall Luxury partnered with premier brands such as Burberry, Hugo Boss, Canada Goose and others to provide limited-edition virtual items and backgrounds for avatars to purchase and use on Taobao Life. 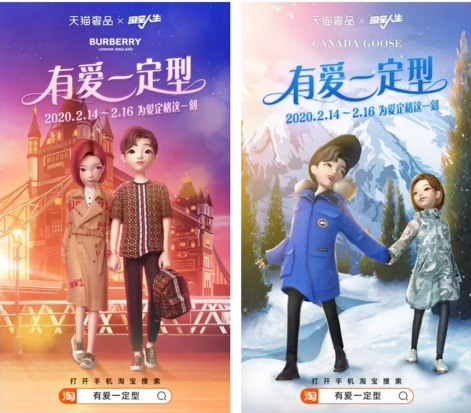 Friends and loved ones could meet up with each other and take in-game photos of their avatars, in their new clothes, in front of these new backgrounds which could then be shared on social media. Tmall said the campaign was a success, drove sales and converted first-time users to the Tmall Luxury Pavillion.

Brands also leveraged Key Opinion Leaders (KOLs) in their campaigns to make sure their ads led with advice on stopping the spread of Covid-19, alongside positive messages to keep people’s spirits up.

Estee Lauder launched a Weibo campaign, for instance, with a number of KOLs in a video promoting the hashtag ‘We Can Win This Fight’. It generated 328,000 discussions online and was watched more than 61 million times.

Alibaba, too, has recently also leveraged Taobao and Tmall – in partnership with competitor JD.com – to provide booking platforms for people wishing to undertake a Covid-19 test in the fight against the illness.

What can the West learn from China’s publishers’ Coronavirus response?

There’s so much data to comb through from such a short period of time, and each new revelation unveils something incredibly interesting about user behaviour from China’s residents during the lockdown, and the most successful approaches from its mobile publishers during that window.

It’s not over yet, though. These companies will still have their challenges post-pandemic. They’ll have to convince these new users to stick with them and their products in the long-term – especially younger users with capital to spend online.

The slowdown of the global economy will also pose a challenge, too. Despite the rise of mobile players during the pandemic, the revenue of some smaller companies has dropped, too. Is it only the larger publishers who have benefited during lockdown?

The key takeaway that western publishers and developers can take away from China’s developers and publishers is the need to be digitally agile at all times.

Publishers and developers in China who were able to pivot their services to mobile users at a time when mobile usage was increasing were more likely to see better results.

The quicker they could implement fresh, positive, creative ideas to customers in lockdown, too, the better the engagement and sales potential seemed to be – especially in an advertising sense.

China is a mobile-first nation, and mobile devices became the entertainment tool-of-choice during lockdown. By putting an agile mobile digital strategy first, publishers were able to grow and attract new customers in positive ways during the very worst of times.

Why Influencers are the Future of Marketing in the Asia-Pacific
Suki Lin looks at how brands can leverage the evolving influencer landscape to develop and execute more effective campaigns.
2022-09-22
Mid-year shopping sales: Effective marketing strategies for SEA e-commerce
Brands only have a small window of opportunity during Southeast Asia’s mid-year shopping season, and Nativex’s Suki Lin examines the ways marketers can develop more effective campaigns by observing consumer behaviour.
2022-07-14
Tailoring marketing strategies for Ramadan
Every year Ramadan comes as a landmark event for Muslims across the world. How brands can connect with Muslim consumers and deliver impactful campaigns during this holy month?   Every year, Muslims all over the world observe Ramadan, a month-long period of fasting, prayer and reflection – and a unique demographic of this size also ...
2022-06-08
Driving consumer engagement with short-form content
The senior regional director at Nativex on the appeal of short-form videos and how brands can incorporate video content into their creative marketing strategies.   In APAC, a renowned mobile-first region, the popularity of short-form, mobile-friendly video content has skyrocketed in recent years. Considered easily digestible, immersive and engaging, more consumers are spending time watching ...
2022-05-18
Share