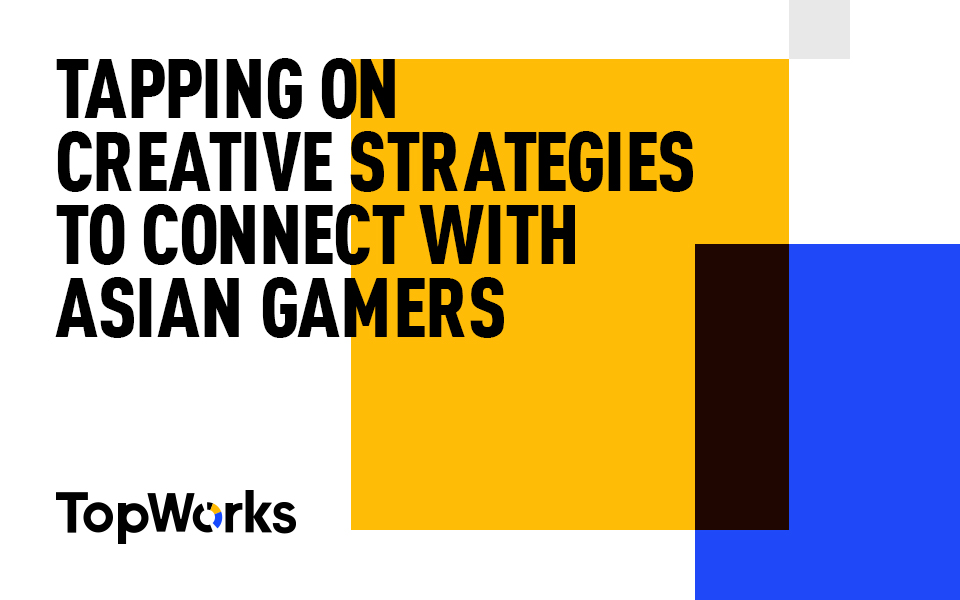 The Asia-Pacific region has been leading the way as a gaming powerhouse with over 1.5 billion gamers. Over the years, Korea and Japan in particular have risen in prominence as key markets with some of the highest revenue-earning potentials. However, this is no secret to game developers everywhere, and successfully breaking into the saturated market is no easy feat.

Eager to gain a slice of the gaming pie in Asia, game developers and publishers Zlong Games and Yoozoo Games partnered with TopWorks Creative Studios to expand their presence, build engagement, and drive conversions. Ares Chronicles is a combat massively multiplayer online role-playing game (MMORPG) published by Zlong Games, where players will have to duel to emerge victorious and earn rewards. Infinity Kingdom is a cartoon-style massively multiplayer online (MMO) strategy game developed by Yoozoo Games.

Uncovering the types of games that appeal most to local audiences

Every creative strategy begins by developing an in-depth understanding of the target audience and their behaviour, including demographics and gaming preferences.

To help Ares Chronicles gain a competitive edge in the Korean market, we conducted extensive research on the types of games that would stand out most to local gamers. Insights revealed that Korean gamers strongly prefer role-playing games (RPG), a trend popularised over two decades ago by pioneering titles such as Legend and Dungeon Fighter. Those that grew up with such legacy games would now be working adults, and would make an ideal target group for Ares Chronicles, due to historical interest, as well as the potential sense of familiarity and nostalgia MMORPGs would offer.

Localisation continued to be key when it came to developing promotional creatives for the Ares Chronicles launch campaign. Instead of adopting a one-size-fits-all approach, we studied the types of advertisements that have done well in Korea and adapted our creatives to include elements that will resonate well with the audience. Throughout the creative process, we worked closely with the team at Zlong Games to enhance the game in multiple aspects, from the choice of soundtrack to the dubbing and use of subtitles. This enabled us to cater the creative according to the local market and ensure that the dialogue accounted for the language nuances.

Developers can also look beyond using animated characters and tap on real-life actors to strengthen the storytelling element behind their creatives. On behalf of Ares Chronicles, we produced a video that was filmed in a workplace setting. Embedding the title in a real-life scenario of getting caught while playing games at work helped create familiarity and relevance for viewers – who may have even encountered similar situations before. A humorous ending made the video more feel-good and memorable to viewers.

An extremely popular Korean crime film, “Tazza: The High Rollers”, was the inspiration for development of the storyline, and this helped strengthen the video’s cultural resonance. Actors in the video were specially selected to capture the range of emotion through expression and dialogue, to accurately capture local nuances.

When developing the promotional materials for Infinity Kingdom, we also reproduced real-life situations and events to make such scenes more relatable to the target audience. We established the backdrop by replicating a typical scenario of Japanese students preparing for university admissions and dispelled the notion that games are time consuming and an interference to their academics. The parallels drawn between the gameplay and real-life scenarios highlighted how playing Infinity Kingdom can help students relieve stress.

By doing so, we wanted the audience to empathise with and relate to the characters featured in the creative. This is especially crucial for games at the early stages of their go-to market promotion, as these creatives can help enhance brand recall and establish strong connections between audience and game.

Ensuring consistent quality in the production of creatives

When it comes to creative production, many developers gravitate towards Unreal Engine (UE) for its unparalleled ability to create hyper-realistic visuals and immersive experiences. With Ares Chronicles, we set out to recreate the game as closely as possible to highlight its three-dimensional experience. Employing UE enabled us to leverage the real-time rendering mechanism, while reducing time and production costs.

“It was a pleasure to work together with TopWorks to execute our creative vision for Ares Chronicles. It is clear that much thought has been put into the creative planning process. The team was also quick to manage challenges along the way and ensured that quality work was delivered at all times,” said Sansan, Marketing Team, Zlong Games.

Work with TopWorks to build creative success in Asia

Developers keen to break into larger Asian markets should adopt creative strategies informed by the preferences of their desired target audience. At TopWorks, the creative studio arm at Nativex, we begin the creation of impactful campaigns by understanding the characteristics of local audiences, then work closely with partners on localisation, to build familiarity and emotional connection through the creatives. Quality is key, from ideation to production, and our expertise and success have underscored our position as a creative studio of choice by our partners.

Nativex is a leading digital marketing agency covering traffic resources across all major markets in the world. By providing high-quality user acquisition automation tools, KOL marketing services, and a wide range of creative customization capabilities, Nativex helps brands and apps around the world boost their cross-regional growth. As part of the Mobvista Group, Nativex has offices in 14 locations around the world and provides services to over 3,000 advertisers across more than 60 countries.

In 2020, Nativex introduced TopWorks Creative Studios, a global creative network with 14 teams established in over 30 countries across the world. TopWorks connects brands with over 200 creative studios worldwide, and has a mission to empower advertisers with excellent creatives that drive performance and enable visible returns. If you’d like to learn more about TopWorks Creative Studios’ solutions, please contact our team.