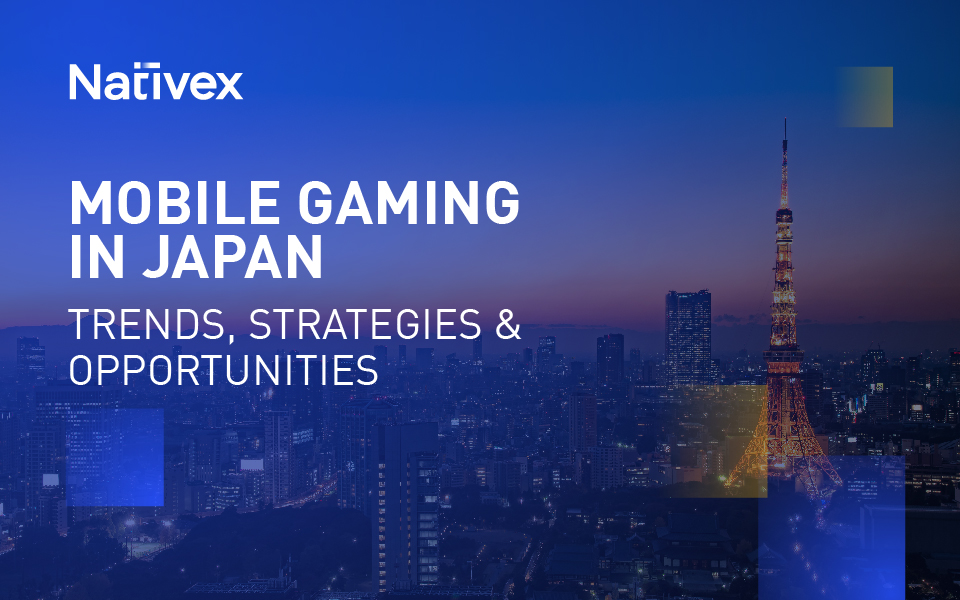 Recently, the global mobile marketing experts at Nativex held a discussion with Hakuhodo (based in Tokyo), TikTok for Business, Mintegral, and Xiimoon regarding the topic “New Trends, New Strategies, and New Opportunities in the Japanese Mobile Game Market in 2022”.

Drawing from their experience, pundits from the participating companies shed light on Japanese mobile gamers’ profiles and preferences and also shared practical tips and success cases – to the benefit of those looking to break into the Japanese mobile game market.

01 Japanese gamers’ profiles: Seven distinct types, each with its own preferences

In order to get closer to their target users, Hakuhodo invented the idea of Sei-katsu-sha (literally translates to “living person”) Insight, thereby putting Sei-katsu-sha at the center of value creation. The idea has since become the company’s source of creativity. Yuichiro Naganawa, director of the company’s 3rd planning division (Tokyo), talked about the seven types of Japanese mobile gamers from the perspective of Sei-katsu-sha.

Using an analysis method called GATRIBE, Hakuhodo divided Japanese mobile gamers into seven categories, each with its own reasons for downloading games and its own expectations when playing games. They differ vastly in every possible aspect, including what games they play, how often and how much time they spend on games, how much money they spend in-game, and what media they use.

“Social gamers” have a tendency to share things with real-life friends and are incredibly sensitive to trends. “Show-off gamers” spend time and money on games, and like to brag about their in-game status or achievements.

“Fan gamers” derive more pleasure from their attachment to game characters than from gameplay.

There are also the “home-style gamers” who like to play games alone or with a small circle of friends, the “addictive gamers” who view games as an integral part of life, the “casual gamers” who only play games to deal with boredom, and the “self-centered gamers” who are the most hardcore of all gamers.

The first three types of gamers have one thing in common: they like to play games with other people. Their enthusiasm for games and social influence means they should be a key target audience for game developers aiming to enter the Japanese market.

Being part of a community is a common motivator for these types of gamers. Still, they differ in what they want from their communities.

Social gamers play games to fit in with real-life friends. They don’t care about how good a game is, as long as it allows them to chat and hang out with friends.

Show-off gamers are keen on comparing notes with fellow players and showing off their in-game achievements. They believe that hard work (in-game spending, practice, skill training) pays off.

Fan gamers enjoy communicating with fellow players about the characters they like. Game developers who put a lot of work into character design are more likely to attract this type of gamers.

It is crucial to grasp the social needs of different types of gamers. From there, you can know what motivates these gamers and how to push the right buttons with them. Then you can develop your marketing plans accordingly every step of the way, from the first exposure and pre-registration to pre-launch and post-launch operations.

The app TikTok is all the rage in Japan and even around the world, and its game-related content has been a major buzz generator. Sammi from TikTok for Business elaborates on how to use TikTok to market your games.

Trend 1: Everything can be cute

The ACG culture has a long history and a massive following in Japan, and it has given rise to the aesthetics of cuteness. Many gamers are total visual creatures who highly value character design and CG quality.

If an ad is to quickly grab gamers’ attention, it has to be distinctly Japanese in aesthetics and able to elicit the feeling of cuteness.

Trend 2: The craze for memes

Growing up in a fun-filled environment, Japanese youths are a creative bunch, and TikTok hits the spot for them.

Sometimes they create memes to showcase their sense of humor; sometimes they repost memes to fit in with a certain community—and even view them as part of their identities. As the trend of “crowd-creation” gains traction, sometimes a lesser-known meme can spread beyond the circle of insiders and become a hit.

Therefore, there were a lot of cases where the use of the right BGM went a long way to helping game developers spread their ads and improving their marketing performance. One example was to incorporate the game title or gameplay keywords into the lyrics of a song and play it repeatedly as BGM to leave a lasting impression. This would also inspire users to create their own game-related content.

Trend 3: Everyone is up for a little fun test

Random fun tests, such as those of zodiac sign personality and destiny, are quite popular these days and tend to generate a lot of buzz, and that’s because they satiate young people’s need to socialize and express themselves.

For example, tests like “Know Your Personality in 1 Second” and “Diagnose Your Relationship in 1 Second” are very popular in Japan. They address people’s desire to understand themselves and satisfy their curiosity and need to belong. To apply this to game marketing, a test like “Which Game Character Would You Rather Be” would seem like a good place to start.

KOL livestream footage is widely used in game-related videos: A lot of game KOLs upload their livestream footage on TikTok. For games that are already somewhat known, this is a good way to further market them and inspire more related content.

Now that we have profiled Japanese gamers and understood the Japanese media landscape, let’s consider the practical side of things: How to develop an advertising strategy for a specific game? How to grow traffic and improve ad performance? Regarding these questions, Mei Yingxue, Nativex’s senior optimization manager, offers a practical guide to advertising mobile games in Japan.

Overall, a game advertising strategy is built around ROI optimization.

It involves identifying users with high willingness to pay through product means and cutting back on advertising directed at users with low willingness to pay. Since an advertiser’s need for conversions and ROI vary depending on the marketing stage, it is crucial to ascertain the current needs and requirements before getting started with ROI optimization.

A game marketing campaign is similar to a “frequent flyer program.” Both divide users into three categories: top, middle, and base. The base consists of the majority of the frequent flyers, or in the case of game marketing, anyone who installs the game, be it non-paying users or big in-game spenders.

The middle is occupied by business-class flyers and above, or in the case of game marketing, potential paying users, which, with the right use of AEO, might include small and medium spenders and some of the big spenders.

The top is comprised of first-class flyers, or highest-value gamers coveted by all game developers.

Cadence-wise, it is important to adopt granular operations in the early, middle, and late stages of the marketing campaign for maximum ROI. The early stage focuses on heightening awareness of the game and showcasing in-game perks to attract new users. The middle stage shifts the focus back to demonstrating the gameplay. The late stage is about creating eye-catching ad content by combining various creatives. 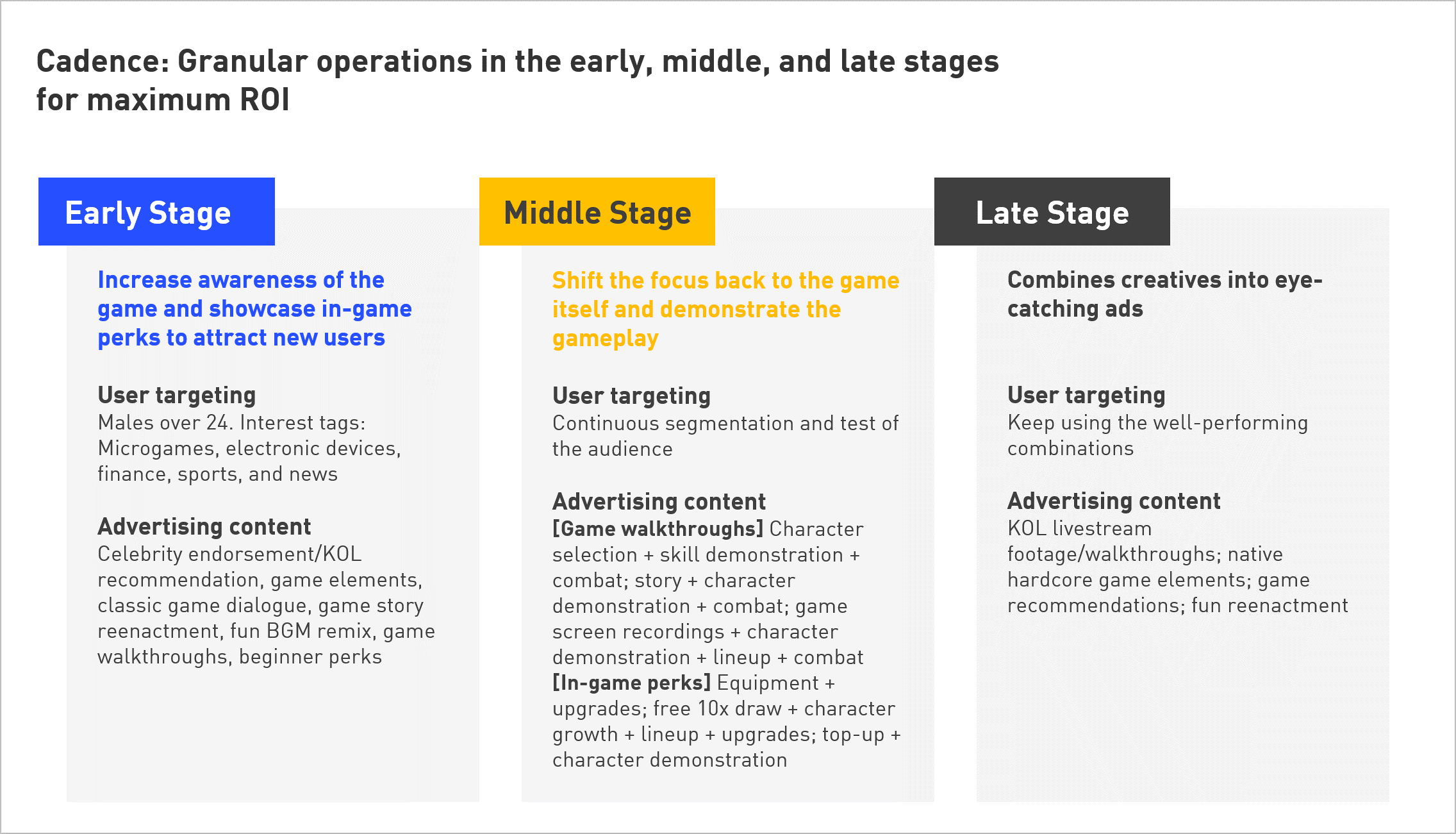 Past marketing experience suggests that creatives in keeping with Japanese gamers’ habits and Japanese culture are better at attracting traffic. One example is a hardcore RPG game that Nativex helped launch in Japan by developing a marketing strategy, one that took into account the creatives, cadence, and target audience:

In the early stage, take a broader targeting approach and adjust creatives as you go along, with the aim of stabilizing CPI.

Grasp the highlights of the game, then identify the most clicked ads and deliver them to core users to further drive ROI

High-quality creatives are a key driver of traffic. This is especially true in the highly developed Japanese market, where only good content can attract good users. Whether on TikTok or elsewhere, it is important to have a lot of diverse creatives at your disposal—videos alone can only achieve so much.

How to use a large amount of well-crafted creatives to drive ROI growth? The answer lies with granular operations, which involve using personalized tags and visualized data for efficient creative management and quick creative iteration.

Winning the Year-End Holiday Season: Marketing Strategies to Engage Your Consumers
The final quarter, or the most wonderful time of the year, is also the busiest sales season, with Black Friday, November 11 (Singles’ Day), December 12 (12.12), Christmas, and New Year's driving major digital sales. In Southeast Asia, many consumers spend well into February to prepare for their lunar new year. During this lucrative extended shopping season, retailers worldwide go all out with special promotions and marketing campaigns to entice Southeast Asian customers.
2022-11-25
How DHgate Succeeded on TikTok Shop with the Help of Nativex
China’s cross-border e-commerce market has seen a tenfold increase and around 2 trillion RMB in revenue in five years. Although it has been growing rapidly over the past decade, there has been increasingly cut-throat competition, diminishing economic returns generated by traffic, and stricter platform rules. As a result, cross-border businesses are pressured to attain traffic ...
2022-11-17
Mobile Marketing in Indonesia: An Emerging Digital Economy
As the largest economy in Southeast Asia, Indonesia boasts tremendous potential for growth and consumption. Indonesia is home to the fourth largest population in the world, with 274 million residents. Gen Zs and millennials account for 58% of the population, compared to the US and China’s 46%, opening itself to a wealth of opportunities for digital brands and apps looking for new growth.
2022-11-04
Essential User Acquisition Channels to Add to Your Marketing Mix
Given the rising advertising costs and the heightened difficulty of targeting, finding the optimal marketing mix is crucial for business growth in 2022. Advertisers must be creative and look towards novel UA methods to add to their acquisition arsenal. TikTok is the rising star for social media advertising and has taken traditional social media platforms ...
2022-11-01
Share