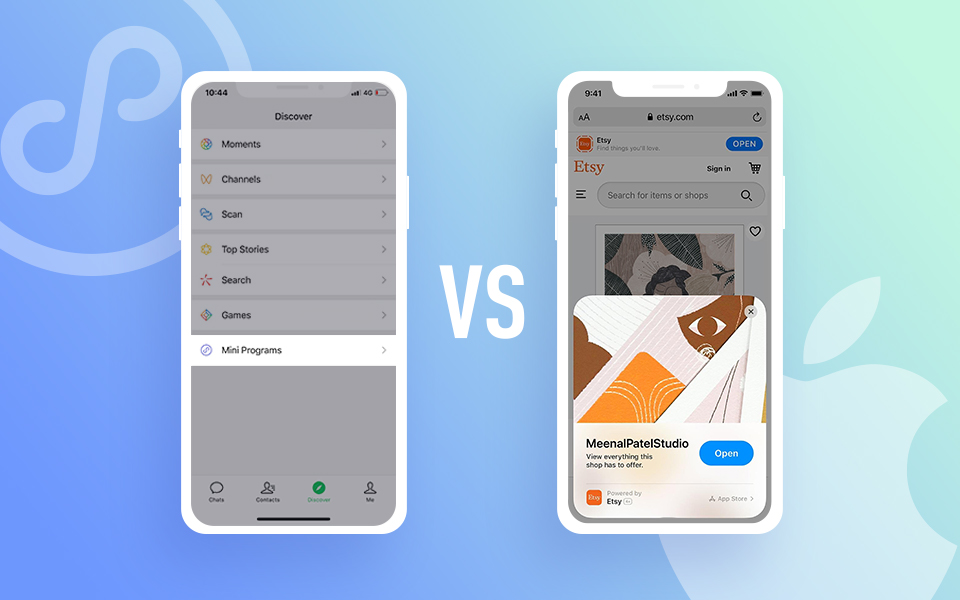 If You Can’t Beat Them, Join Them: How Apple’s App Clips Follow WeChat’s Lead

Sick of bulky apps taking up space on your phone?

Apple believes it has a solution. Its new App Clips feature was announced during their last Worldwide Developers Conference (WWDC) in June, along with iOS 14.

App Clips is set to arrive later this year as part of the new iOS, but what is it?

App Clips have been hailed as ‘a strategic shift for app discovery’. Specific App Clip functions can be triggered by scanning a QR code, an NFC tag or a dedicated App Clip code among other methods, which will allow users to seamlessly open the new app without downloading it, when they need it.

“It’s visually beautiful and distinct,” Ada Chan, Apple App Clips engineer said in a WWDC 2020 video session. “Apple will be releasing tools later this year so developers can create their own visual codes.”

Developers will also be able to integrate App Clips with Apple Pay and Sign-In with Apple to make them easy to access and use.

A more fluid app experience that clears users’ phones of app clutter and frees up space. Apple, you geniuses, you’ve done it again! Or have you?

A Clip off the old block

If you’re the kind of person that likes letting the air out of balloons at parties, then you might take some delight in telling your Apple-obsessed friends that the tech behind App Clips is actually nothing new.

A similar service has been running across China for the last three years through Tencent’s WeChat. WeChat’s mini programs were launched back in 2017, and are an unbridled success story.

Mini programs are smaller versions of regular apps that live within WeChat, allowing you to access some of their functionalities without having to download the entire app. Sounds familiar?

Apps within an app, mini programs are a very present element of the WeChat universe, which already contains all kinds of services, ranging from food delivery to loans.

It’s hard to argue that App Clips aren’t at least inspired by WeChat’s mini programs. They carry a lot of similarities, including:

And more. Apple will be hoping, though, that their App Clips can quickly catch up to the success WeChat’s mini programs have brought Tencent.

The most recent numbers indicate that WeChat counts more than 1 million mini programs and 1.1. billion daily transactions – half of the size of the Apple Store, which was launched a decade ago.

Tencent also announced at the end of last year that its users had spent 800 billion yuan (US$115 billion) through mini programs, a 160% increase from the previous year.

Want to see how you can leverage the power of App Clips to advertise your game or app in China? Let’s talk!

Mini programs are a huge part of China’s largest social network, and those figures can only grow as more people embrace the platform and its technology.

So, it’s little wonder that Apple is launching a similar service in the west, where it will be a relatively fresh concept to hundreds of millions of iPhone users.

App Clips may represent a step forward for privacy rights

We can’t be too hard on Apple. Many companies have used creative licence to copy some of Apple’s best ideas for years, so it’s only fair that they take inspiration from elsewhere, too.

At the same time, Apple hasn’t been having the best time of it in China thanks to factors such as the amount of Android stores across the country, the impact of Trump’s ‘trade war’, changes to app legislation, and more.

So taking a successful formula from its competitors, tweaking it and launching it in a market where there’s little competition actually looks like a smart move from Apple.

There will be some notable differences from mini programs, too. App Clips, for one, may be a stellar weapon for Apple when it comes to differentiating itself against other tech giants when it comes to privacy.

App Clips’ compatibility with Apple Pay and Sign in with Apple could represent a data privacy win, as an initial report from Wired suggests App Clips won’t be able to access personal information such as health and fitness data or contact data.

As App Clips will disappear after a few days of non-use, so will the data collected for the task, too, according to Wired. Similarly, Notifications will be fewer and further between as they’ll only be tailored to the task the Clip is downloaded for.

Instead of irritating apps constantly begging users for attention, App Clips could represent a new type of ‘burner app’ that is only there for a couple of days and disappears from your life when not needed.

The advertising opportunities App Clips open up for developers

We wanted to write about App Clips and mini programs, too, because both could actually represent a new channel for games developers and publishers to advertise through.

In terms of verticals, the most recent available data showed that games take the largest piece of WeChat’s mini programs cake with 28% followed by life services and e-commerce functionalities.

Mini games also accounted for 33% of the top-100 mini programs in mid-June 2018, according to China Internet Watch, with 81% of mini programs users playing a game around the same time.

Last year, The Verge wrote that there were approximately 400 million monthly players of WeChat mini games in China – Apple will be looking to replicate that success as quickly as possible with App Clips.

For games and app developers and publishers, App Clips and mini programs could be a massive new outreach avenue for them to explore across both eastern and the western markets.

Working with an agency with on-the-ground experience of China and who has knowledge of how to reach out to specific audiences with WeChat and mini programs can go a long way to helping you explore the amazing opportunities available in the Chinese mobile market.

If you’d like to find out more about App Clips, WeChat, and breaking into the massive Chinese mobile market to advertise your game or app, we’d love to speak with you. Get in touch with the Nativex team today to find out more.

Want to see how you can leverage the power of App Clips to advertise your game or app in China? Get in touch with the Nativex team today!

Winning the Year-End Holiday Season: Marketing Strategies to Engage Your Consumers
The final quarter, or the most wonderful time of the year, is also the busiest sales season, with Black Friday, November 11 (Singles’ Day), December 12 (12.12), Christmas, and New Year's driving major digital sales. In Southeast Asia, many consumers spend well into February to prepare for their lunar new year. During this lucrative extended shopping season, retailers worldwide go all out with special promotions and marketing campaigns to entice Southeast Asian customers.
2022-11-25
How DHgate Succeeded on TikTok Shop with the Help of Nativex
China’s cross-border e-commerce market has seen a tenfold increase and around 2 trillion RMB in revenue in five years. Although it has been growing rapidly over the past decade, there has been increasingly cut-throat competition, diminishing economic returns generated by traffic, and stricter platform rules. As a result, cross-border businesses are pressured to attain traffic ...
2022-11-17
Mobile Marketing in Indonesia: An Emerging Digital Economy
As the largest economy in Southeast Asia, Indonesia boasts tremendous potential for growth and consumption. Indonesia is home to the fourth largest population in the world, with 274 million residents. Gen Zs and millennials account for 58% of the population, compared to the US and China’s 46%, opening itself to a wealth of opportunities for digital brands and apps looking for new growth.
2022-11-04
Essential User Acquisition Channels to Add to Your Marketing Mix
Given the rising advertising costs and the heightened difficulty of targeting, finding the optimal marketing mix is crucial for business growth in 2022. Advertisers must be creative and look towards novel UA methods to add to their acquisition arsenal. TikTok is the rising star for social media advertising and has taken traditional social media platforms ...
2022-11-01
Share